Since the beginning, DeMolay has been a youth fraternity led by the members of each Chapter. The minutes of Mother Chapter include that the original Advisors, and even the first members of the Grand Council, were elected by the Active DeMolays of the Chapter. However, once the Grand Council was created in 1920, the business affairs of the organization above the chapter level were handled by adult leaders. At some point aftwerards, the Grand Council became a self-perpetuating body with no direct input from the young men. For many years, there was no clear answer as to who would represent the youth of DeMolay on the international level. In the late 1950’s, Dad H. Malvern Marks, Active Member in Texas, presented the idea of having youth leadership on the international level. He suggested the creation of The International Conference of State, Provincial, and Jurisdictional Master Councilors, with the idea that the first conference be held in 1960. The conference was to be composed of the Master Councilors of each of the jurisdictions. At that first meeting, they elected a Chairman to lead their body and represent them. In 1962, they decided they needed two officers to represent them and elected a Secretary. The Conference lasted just eight years until Dad George Newbury, Sovereign Grand Commander of the Scottish Rite Northern Masonic Jurisdiction and Active Member from New York, proposed the creation of the International DeMolay Congress. Dad Newbury’s vision was to expand the youth representation begun by Dad Marks. Dad Newbury believed that the young men had something to bring to the table. In 1968, the International DeMolay Congress met for the first time, composed of two representatives from each jurisdiction. The Congress elected Roderick S. Coy who was serving as the Chairman of the Conference of State, Provincial and Jurisdictional Master Councilors to be the first International Master Councilor and Niles F. Jensen, who was serving as the Conference’s Secretary to be the first International Congress Secretary. The DeMolay Congress has continued to provide a platform for Active DeMolays to influence the vision and direction of their fraternity at the international level for over 50 years.

And peaceful way past thunder to the sun.

By bringing unity to humankind.

Of chaos, listening in every heart

William Fife Knowland is a Senior DeMolay from Northern California. Although his chapter is unknown, he is included in Dad Land’s report of Senior DeMolays serving in Congress at the time of the 1958 Supreme Council Session.

A second generation California Republican, Knowland was born while his father was serving his third term as a U.S. Representative. William started his political career early when he made campaign speeches at the age of 12 for the 1920 Republican ticket that included Warren G. Harding and Calvin Coolidge. He started his official political career at 25 when he became a California State Assemblyman. He served for two years in this role before joining the California State Senate where he served four years. After his four-year term, Knowland didn't seek re-election, but he did serve as the Chairman for the executive committee of the Republican National Committee. Knowland put his political ambitions aside when he was drafted into the U.S. Army for World War II. He served four years in the Army, beginning as a Private, and then attending Officer Candidate School. During the course of his enlistment, he attained the rank of Major.

On August 26, 1945, at age 37, he entered the U.S. Senate by appointment of Governor Earl Warren to fill a vacancy. Governor Warren tried to name Knowland's father, who declined the offer and suggested William, who was still serving overseas. When Robert A. Taft died on July 31, 1953, Knowland was chosen to succeed him as Senate Majority Leader. Only 44 years old, he was the youngest Senator to occupy the position of Majority Leader. Knowland's counterpart from the Democratic party was Lyndon B. Johnson. Knowland, as Senate Minority Leader, worked with then-Majority Leader Johnson to craft and pass the Civil Rights Act of 1957.

In 1958, Knowland didn't run for re-election to the Senate but instead decided to run for Governor of California. Knowland secured the Republican nomination only after a "brutal" contest with Goodwin J. Knight who was the incumbent. Knight then agreed to run for Knowland's seat in the Senate.  Knowland lost the election to the Democratic candidate, Edmund G. Brown, by a wide margin. Knowland had so much debt from running the campaigns that his father had to sell his radio station, part of the Oakland Tribune corporation, to repay some of them. William never ran for an elected office after that but served as the head of the California Republican Party from 1959-1967. He died in 1974. 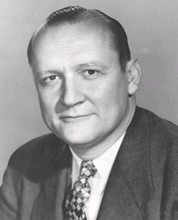