October 19, 2019
Return to view other newsletters

The Supreme Council is responsible for making the decisions of how DeMolay International operates. These decisions are made in the best interest of the Active DeMolays. Active DeMolays are precisely how the Supreme Council started. On April 30, 1919, the first Advisory Council was appointed by the Sponsoring Body of the DeMolai Council, as Kansas City Chapter (later Mother Chapter), was then known. They discussed how to best help the young men who were joining in the Order’s first few weeks. The Advisory Council met again March 3, 1920, and met several times over the next few months. On May 4,1920, Alex McDonald moved that “this body become a Grand or Supreme Council and a start be made to have Chapters in other cities.” August 30, 1920, was an informal meeting that would eventually lead to the formation of the Grand Council, with March 7, 1921 as its first meeting. At that meeting, the first order of business was the adoption of the Constitution and Statutes as created by the original or Formation Committee. The Constitution and Statutes, as adopted, provided that the number of members of the Grand Council was to be fixed at not exceeding fifty. The second order of business was to elect Alexander G. Cochran as the first Grand Master Councilor. A Deputy Grand Master Councilor, Grand Senior Councilor, Grand Junior Councilor, Grand Treasurer were also elected, with Dad Land elected as Grand Scribe. New members, all Masons, were elected to the Council to represent the Order of DeMolay’s interests in Colorado, Nebraska, Kansas, South Dakota, Iowa, and California. Then Judge Cochran appointed a full line of officers to parallel the Chapter, with Louis Lower appointed to be the Grand Sentinel. Lower wasn’t a member of the Grand Council, but Dad Land wanted him to be on hand, and guarding the door was as close as he could get while he wasn’t a Mason.

The Obligatory Days Committee was appointed, and on the same day, they reported, naming the following as Obligatory Days for all members: Patriots’ Day, Parents’ Day, DeMolay Day of Comfort, Devotional Day, and Educational Day. Dad Land, as Grand Scribe presented a list of 52 chapters that requested the granting of a permanent charter, all having been granted Letters Temporary by Dad Land, before the Grand Council had been formed. The active membership of those Chapters as of January 31, 1921, was 3,336. All 52 requests were granted. A representative of the Grand Council was authorized for employment, to contact and address Masonic Bodies regarding the starting of DeMolay Chapters and to assist in the institution of new Chapters. They also set the financial year of the Order, and set some fees to generate funds to cover costs that had been paid for by donors.  “The Scribe of each Chapter shall remit to the Grand Scribe the sum of 50 cents for each candidate receiving the initiatory degree, 25 cents for each candidate receiving the DeMolay degree and, in addition, the sum of 50 cents for a Patent for each candidate receiving both degrees.” It was also provided that the annual membership fee for each member would be 15 cents. This was the first time the meeting lasted more than one day.

Below are the members of the original Grand Council. 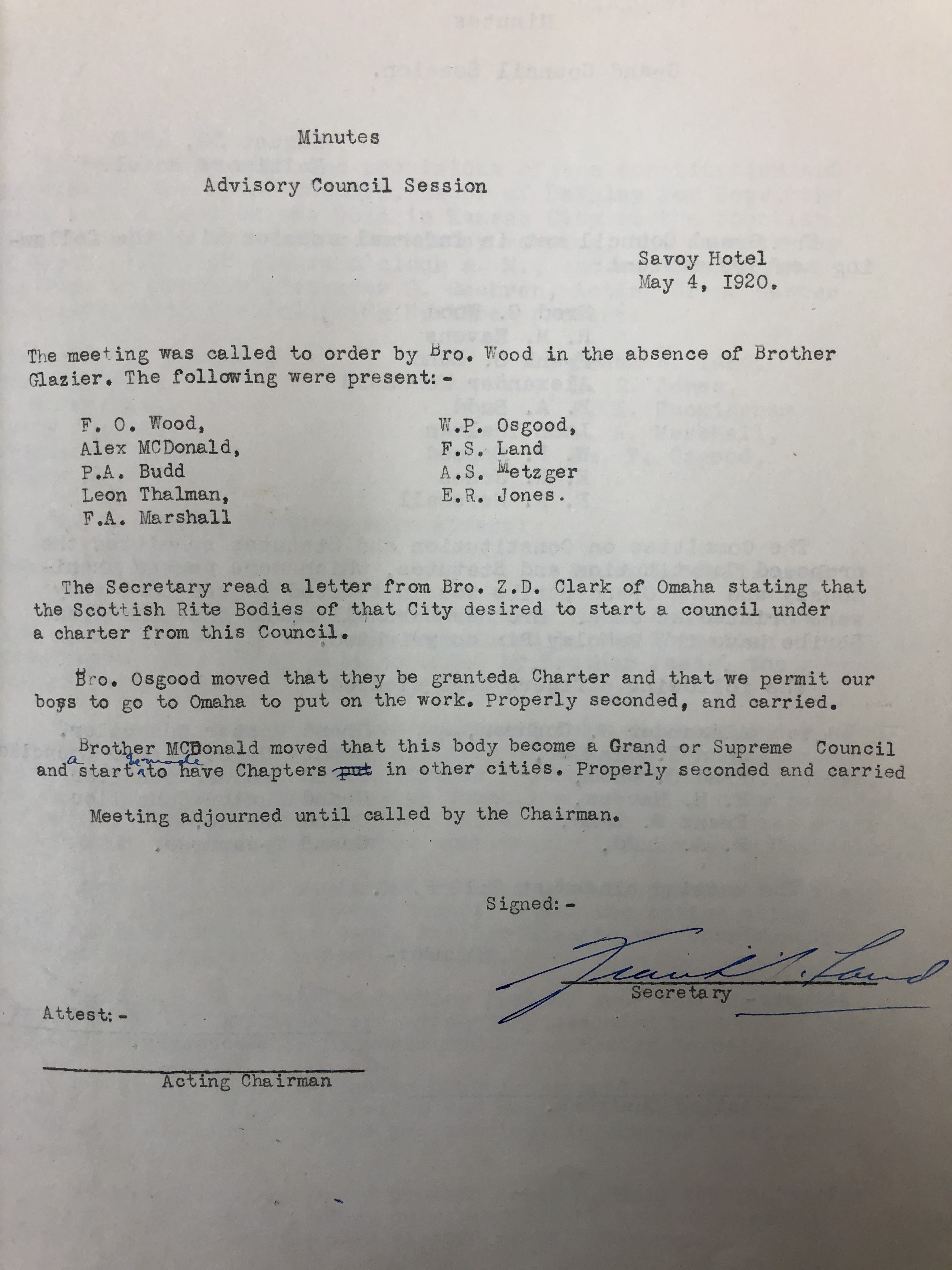 And peaceful way past thunder to the sun

By bringing unity to humankind

Of chaous, listening in every heart