Dad Frank S. Land’s early career as the Administrator of the Scottish Rite’s Employment Bureau and its Masons Relief Program kept him motivated and busy from 1914 through 1919 helping individuals and families find jobs, and ways to make ends meet.  In one year, 11306 parcels of food were delivered and 1581 packages of clothing were given to those with a need.  In the five years between his employment and the founding of DeMolay, Dad Land had been concerned with pairing boys with successful mentors, but it never went further than a meeting or two before the boys got discouraged when the mentor didn’t have enough time to give them.  He modeled his first attempts after the Chicago Big Brothers program, but realized that getting them full-time mentoring was not going to work out.  He then wondered if boys mentoring boys could be the answer. 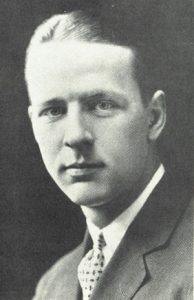 Credit goes to Sam Freet, the newly installed Senior Warden of Ivanhoe (Dad’s) Lodge, for making the suggestion in January of 1919 that Land help find a job for the son of Elmer Lower, Sr., who died January 3rd, 1918.  His wife and 4 children were struggling to pay the monthly bills.  Land didn’t think twice and agreed to meet with the boy. Louis Lower impressed him with his abilities and aspirations and Land hired him to work in his office.  They struck up a great friendship and within a short time, Land asked Lower to gather some friends to talk about forming a club for boys at the Scottish Rite Temple. 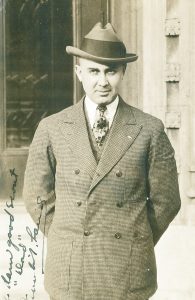 Louis brought 9 boys to the Temple on February 19, 1919. Gorman McBride recalled that Land gave them a tour, fed them ice cream sodas and sat them down to talk business.  McBride, during an interview by the Ohio DeMolay News in 1969, said, “Dad Land was at the ripe old age of 28 and we were getting along in years.  We were 17.  We met in his conference room at the Scottish Rite Temple around the conference table.  He said, ‘McBride, you be the acting President and Lower you be the Secretary.’ So that’s how we started out.”  Land then challenged them to gather more friends to put their ideas together and to create something completely new.  On March 24, 1919, 31 boys, all from the same high school showed up to find out more about this club.  Land knew he had something good happening, and he allowed them to vote on the club name, set the age from 16-21, and to establish some rules for the election of officers.  This is the day that the Order of DeMolay was officially born.  Officers were elected on April 8, 1919.