The people who knew “Dad” Frank S. Land well always said that he was in private what he was in public.  He never drank alcohol.  He didn’t curse, or utter any kind of negative thought.  He approached every problem with a positive mental attitude, supplemented by his strong religious convictions and his fraternal principles.

But that didn’t stop people from trying his patience. Wilbur Minich was a trial to deal with!  “Dad” Minich was Chapter Advisor of Pilgrim Chapter in Harrisburg, Pennsylvania, and he was the kind of man who said exactly what he thought… with a little drama thrown in for fun.

The Grand Council decided to issue a new style and size of membership patent which was larger in size, and on the back of which DeMolays could get autographs of friends and Masons.  It featured more detail, and a place for a small photograph.  The intent was to copy the Scottish Rite’s practice of issuing large patents folded up in pocket-sized cases so that members could use the document as identification when traveling and visited other DeMolay Chapters.

“Dad” Minich wasn’t happy with the change— in fact, he was furious.  So just 6 days after the date of the original letter, he wrote a snippy letter to the Founder of the Order, demanding on behalf of his Advisory Council, that ONLY the OLD STYLE  patents be sent to his Chapter.  He then detailed his objections:  too big, requiring sponsoring body officer signatures, a required photograph of a youth whose features would dramatically change, difficulty finding a photographer, burden on the advisors, burden on the Scribe, etc.  He concluded with “This decision, we regret, practically amounts to insubordination against the Grand Council but the only suggestion we have to make is that our resignations be accepted and the Grand Council cast about for another set of men in Harrisburg who will be willing to carry the load.”

“Dad” Land responded diplomatically by agreeing to send the old style smaller-sized patents to Pilgrim Chapter, but then he tactfully refuted every objection that was made, noting, in particular, that the boys had requested the larger-sized document.

Their letters having crossed in the mail, Minich then received a package of the NEW patents and fired back with more objections and (almost bragging) references to having conflicts with Grand Lodge and Scottish Rite leadership, with a worry that adverse actions might be taken by the Grand Lodge against DeMolay. Then he played the “we are different in Pennsylvania” card.  “Dad” Land responded promptly, offered to make it right, immediately, and sent a gracious apology.

You can read the entire communication chain here.

(Click the above envelope to view the full communication chain)

1.) Do you think the idea of the larger patent was a good one? What about adding a photograph?  Was that a good idea?

3.) What leadership qualities did “Dad” Land exhibit in his responses to “Dad” Minich’s letters? Did any negative qualities come out in your reading of his responses?

5.) How did “Dad” Land diffuse a potentially explosive situation? 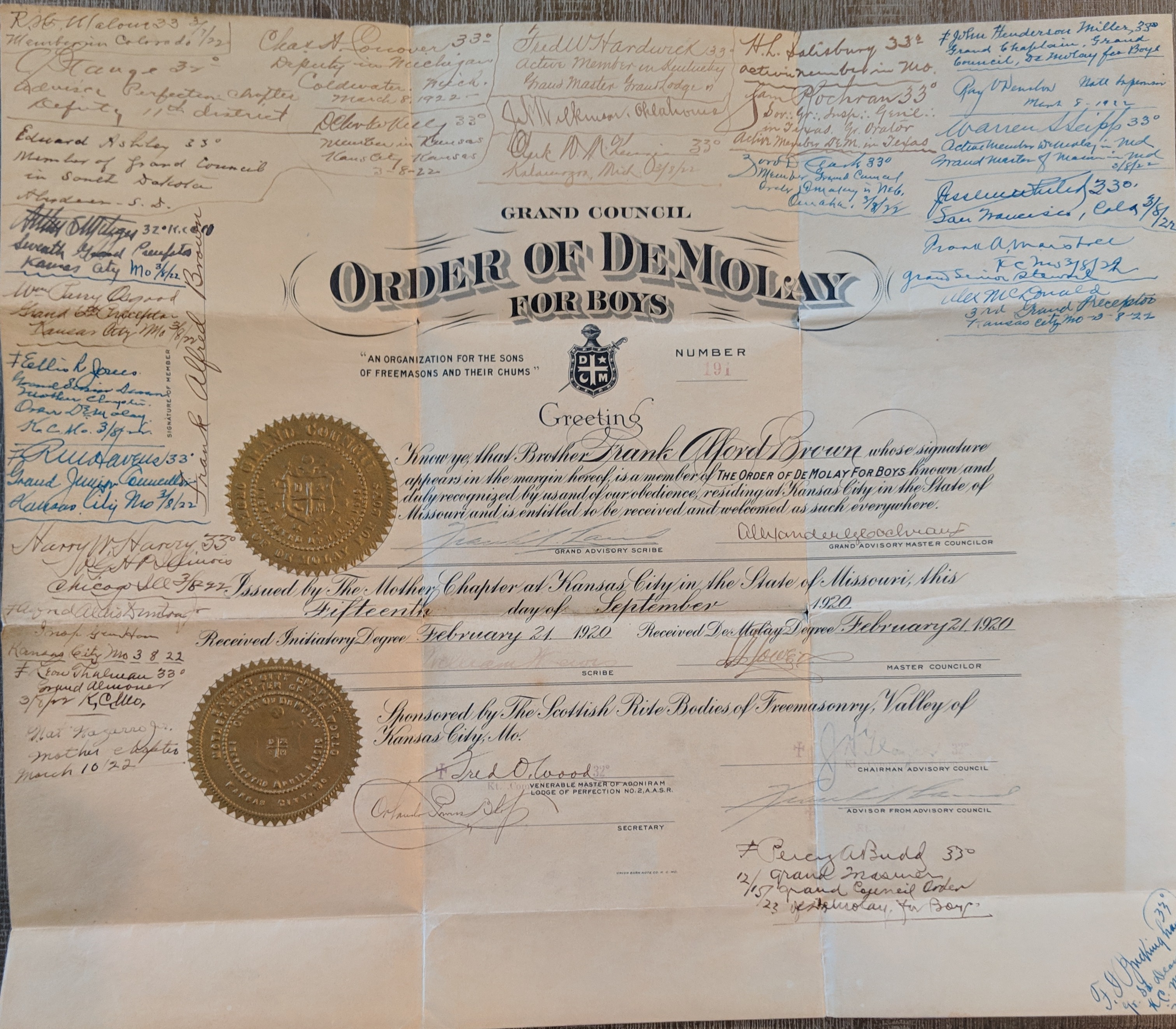