DEATH OF “THE FIRST DeMOLAY”

DEATH OF “THE FIRST DeMOLAY”

Louis Gordon Lower, 41, the first DeMolay, died on July 18, 1943.  The assailant was a man by the name of Clyde Souders, 49, who was a guard in a war plant in the Kansas City area at that time.  He was intoxicated, and was trying to direct traffic.  He stopped Lower, who challenged him for his erratic actions.  When Lower got out of his car and reached out to see Souders badge, the security guard was angered, reached for his revolver, and shot him in the chest.  Lower died within 15-minutes.  Souders was sentenced by the Court to fifteen years in prison, but was paroled after serving three years, and was not very remorseful.  He said, “It’s just my luck it had to be some big shot.  I’m sorry that I shot the man.  I didn’t know him, but it’s too bad for me that it wasn’t some little fellow.”

Frank S. Land, Founder and Secretary General of The Grand Council of the Order of DeMolay, wrote in the notice he issued regarding the death of Lower:

“A week ago, last Sunday morning, July eighteenth, Louis Gordon Lower, the first DeMolay, was murdered by a man attempting to direct traffic at a crowded intersection near the Union Station in Kansas City, Missouri.

“His funeral, one of the largest ever held in the city, was conducted by the members of the DeMolay Legion of Honor on July the twentieth.  He was forty-one years of age.

“He is survived by his widow, Mrs. Dazie B. Lower, his sisters, Miss Fredonia Lower and Mrs. J.E. Wasson, and a brother Elmer W. Lower, L.O.H.   Louis Lower was not only the first DeMolay in the world but he was the first member of the Legion of Honor and the first Chevalier. He was a symbol to millions of young men, of the ideals and teachings of the Order of DeMolay. He wore the mantle of this stewardship with dignity and grace. He never forgot the responsibility that was his. The ethics of leadership taught him in DeMolay flowered in countless fields of endeavor. At the time of his passing he was the Director of the great Municipal Auditorium in Kansas City.

“Louis Lower was a man of ideals. He kept them to himself until the hour of fulfillment arrived. Some were the dreams of boyhood when he was an active DeMolay from which he never departed. He loved God, his home and his country. He was a knight errant in his daily life although he would never admit it; but it was there. Passing by on the other side was not a mode of travel through life ever possible to him.

“Louis Lower today becomes a legend. He will forever be leading the mystical vanguard of youth. With the morning sun still shining upon his brow, death came, and

'So valiant - for truth passed over and all the
trumpets sounded for him on the other side.'

Interestingly, the newspaper article announcing his death highlighted Lower as one of the men who destroyed the Pendergast political machine that controlled local area elections.  Lower, who was well-known and had many, many friends in his home-town, played a prominent role in electing a Mayor who did NOT owe Tom Pendergast any political favors.  Because of his excellent work, he was appointed Manager of the Municipal Auditorium.  He had also been an insurance salesman, and a full-time membership director for DeMolay.  He was known for his ability to bring people together for causes.  He was considered to be the logical heir-apparent for Dad Land in the far future.  It wasn’t something he campaigned for—it was just everyone’s expectation.  Lower was an up-and-coming political star, and had a bright future in local government, cut off by a random event.  It was truly a tragedy for his family, for the community, for the Order of DeMolay, and for Dad Land, who always looked upon Louis as his son. 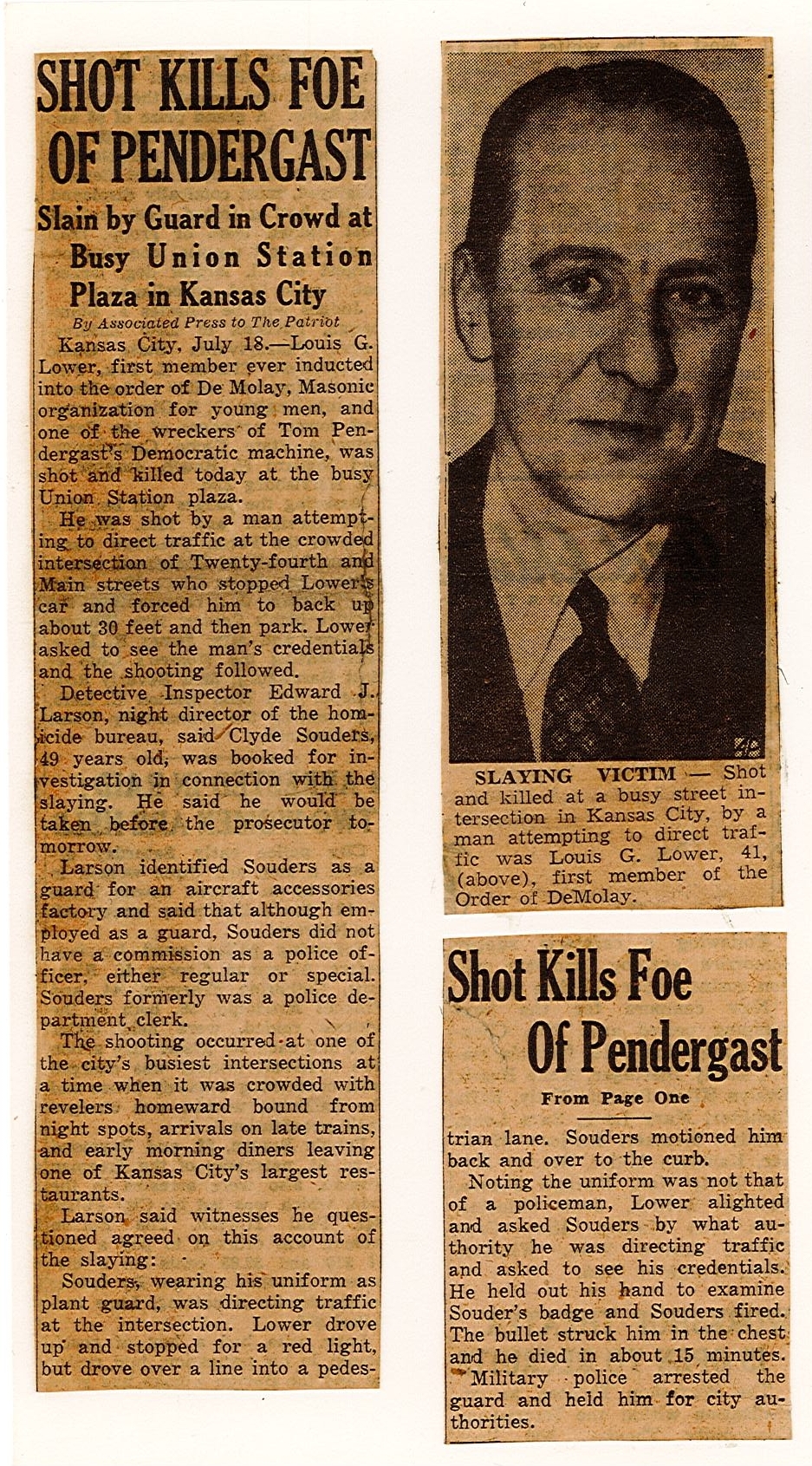 1.) If you had been given a chance to meet Louis Lower, what question or questions would you have liked to ask him?

2.) Louis Lower was considered to be “the logical heir-apparent” to Dad Land. What does that mean?  Do you think that put a lot of pressure of him?

3.)It was written of him that “he fought within himself to bridle a temper and to refrain from…”the words that tremble on the tongue in moments of irritation or wounded pride.” Do you think this might have had something to do with why he was shot?

4.)The newspaper article highlighted his significance to the Order of DeMolay, but the headline made an issue out of his opposition to Tom Pendergast and his gangster-style of intimidation politics. Do you think there was early suspicion that the shooting was in retribution for his political victory?