Centennial Celebration Moments # 1
“As the Twig is Bent, So Shall the Tree Grow”

A lot of importance has been placed on knowing someone’s lineage—their family history—and some people believe it can tell you something about a person. You might know someone who is related to a famous person—a President, or some other great statesman, and you’ve heard people say—“leadership comes naturally to him—it is in his blood.” Others however may be related to an infamous criminal, and you will hear people say, “Failure is his destiny.” Is either statement really true? Can one’s family tree predict disaster, or can it motivate one to rise above, to be better than, or to make better life choices?

“Dad” Frank S. Land was the son of Elizabeth Lottie Sampson and William Sherman Land. Elizabeth’s family proudly traced its pioneer heritage to a granddaughter of Daniel Boone. He could have traced his roots at least to his great, great grandparents, Thomas and Lucy Land, Virginia farmers. Thomas’ son, George, was born in 1805 and at some point he married Elizabeth Rayles and moved to Switzerland County, Indiana. George and Elizabeth had 8 children, 3 girls and 5 boys, one of whom was William Land, born in Indiana in 1825. William married Francis M. McCreary in 1846 and in 1870 they moved to Paola, Miami County, Kansas. William and Francis had 10 children, 2 girls and 8 boys, one of whom was William Sherman Land, (always called Sherman) born in 1865. This was Frank’s father. His mother defied her family’s wishes and married young Sherman when she was just 15 years old. He was 20 years old and a struggling lumberyard employee. Frank was born a year later, on June 21st, 1890 in Kansas City, MO. By 1892, Elizabeth and Sherman moved to St. Louis, MO. where they struggled to make ends meet.

Frank grew up with his father in the home until he was 12, but he was a different child than Sherman had imagined his son would be. This was where Frank became known as “The Little Minister” at age 10. His father didn’t relate well with his studious and religiously motivated son. Personality and financial tensions at home with Elizabeth left Sherman hanging out in the local pub every night, but young Frank was often there to walk him home. By 1902 the marriage was irreparably broken, and Elizabeth took Frank and his younger sister back to Kansas City to live with her mother, Mrs. Martha Sampson. Sherman remained in St. Louis, and by 1912 he had moved to California, according to his own mother’s obituary of that year. But he never had any recorded contact with his son after that, and Frank seldom spoke of him. 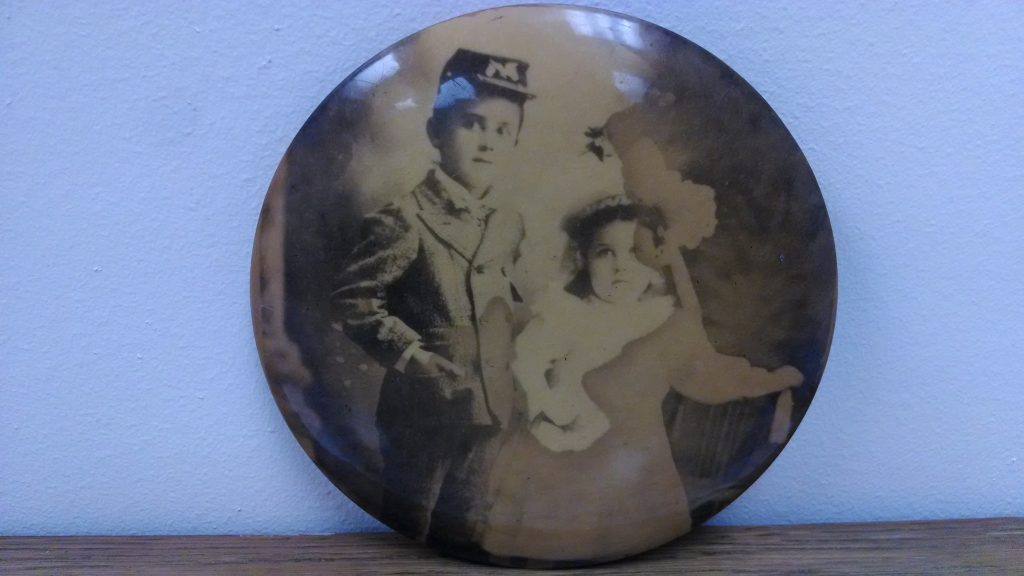 Pictured above is a photo of Dad Frank S . Land and his sister, Etta Glenn, known as “Sissy”

Frank’s grandmother, Mrs. Sampson, was to have an abiding influence on his life. She encouraged him through his teenage years and middle school, with the dream that he would someday go to college. But the money wasn’t there, and, in truth, the family needed him to work. With two years of high school to go, Mrs. Sampson conceived the idea and helped him to open the Land Family Restaurant that paid the family expenses. But in order to manage the restaurant, he had to drop out of school. When his mother re-married a year later in 1909, Frank remained with his Grandmother, and at age 18, took sole ownership of the restaurant. When he turned 21, it was Mrs. Sampson who told him that his grandfather had been a Mason, and she gave him $50, enough money to petition a Lodge for membership, because she believed he would become a better man and benefit by being around Masons. (To understand how significant a gift this was, that amount in 1912 would equal the purchasing power of over $1200 today!) Between April and November of 1912, Frank S. Land joined a Masonic Lodge, a Royal Arch Chapter, a Council of Cryptic Masons, a Commandery, the Scottish Rite and the Shrine.