How to “Fix” the DeMolay Degree 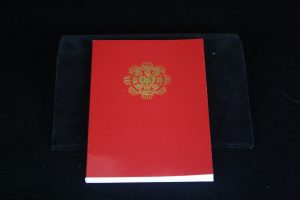 How to “Fix” the DeMolay Degree

By 1922, there was a general feeling that the DeMolay Degree, which, at first was just the trial scene, was missing something.  Several people had written other scenes to provide context, and had tried to introduce Philip the Fair, King of France, and Pope Clement into the drama.  Even Frank Marshall admitted that something was missing, and he continued to write to enhance the work.  By 1920, he had written an opening speech by the Orator for the DeMolay Degree. He called it a Preamble.

It included nothing that we use today, except the final paragraph.

Here is a sample of what Marshall wrote:

“The last act in the great drama was consummated when DeMolay, after a farcical trial before inquisitors who had already foredoomed him to death, refused to renounce his allegiance to the Order or aid the impious designs of the King and Pope.  He was burned at the stake in front of the Cathedral of Notre Dame in 1314.  Masonic and profane records do not agree as to the date of his martyrdom, but the Order of DeMolay has selected March 11th, supported by the testimony of a majority of reliable historians.

"The first and principal scene of the degree depicts the arraignment of DeMolay before the Inquisition, his refusal to betray his brethren, reveal the secrets of the Order and to hand over such property as had not already been seized; his temptation with offers of rewards and honors; his condemnation and sentence to the stake.  The second scene is a tableau, depicting the actual martyrdom and the final scene symbolizes the reverent tributes paid to his memory by all members of the Order of DeMolay."

However, even Frank Marshall's additions had to go to the Grand Council for approval.  By the Second Annual Grand Council Session of 1922, held in the Masonic Temple at 9th and Harrison Streets in Kansas City, Missouri, the members of that body were still arguing over the value that speech brought to the drama.  Some wanted the details in the Orator's speech to be brought out in a dramatic form, rather than as a lecture.  Others wanted to be sure ALL the facts stated were correct.  Some wanted to avoid controversy by tabling the discussion.  In 11 pages of transcribed debate, many voices were heard, including Frank Land, several times.  The Ritual Committee was agitated that the members weren't taking their advice.

Brother Kelly, a member of the Ritual Committee, said this:

"Brother Grand Master Councilor, this Ritual Committee has been working for over a year on this very subject and we have a report, and I think we ought to take some definite action at this meeting. I do not think that we want to spend another year listening to criticisms of the DeMolay boys and the Advisory Councils all over the country, because we have not got something for them on this DeMolay Degree.  They want it.  There is a demand for it.  I know it, I hear it every day of my life, when are we going to get this fixed up, why don't we get something on that.  If you are going to use any part of that, let us adopt it as a prologue of our degree; if you want to use something different, let that be done, but for heaven's sake, let us do something!"

After more debate, it was finally approved as "The Prologue" But it didn't last very long.

2.) In the early days, the DeMolay Grand Council was convinced to memorialize March 11th as the anniversary of the death of Jacques DeMolay.  Why do you think this changed to March 18th in later years?

3.) What does the phrase “Masonic and profane records do not agree” really mean?  (This is a very different use of the word, “profane,“ than you are used to.)