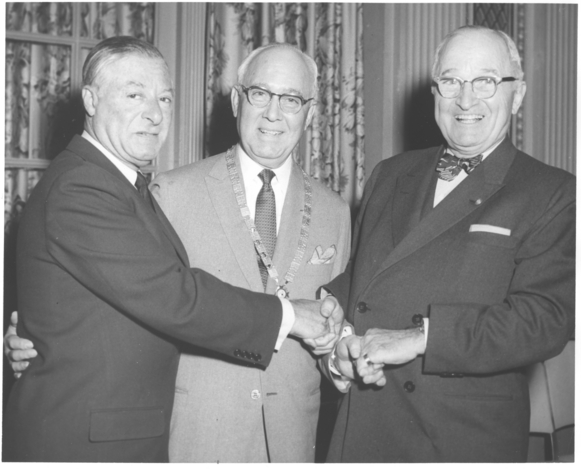 Former President of the United States, Harry S Truman lived in Independence, Missouri, not far from Kansas City.  He was a very active Mason, and naturally got to know Dad Frank S. Land very well.  Truman became a United States Senator in 1934 and was able to be very active in Freemasonry in Missouri because, in those days, politicians didn’t spend as much time in Washington, D.C.  Thus, Truman was able to serve as Grand Master of Masons in Missouri in 1940-1941.

They had a life-long friendship that Truman didn’t forget when he served as President, and it was with his help that Dad Land was able to be elected to serve as Imperial Potentate of the Shrine of North America.  Land had been an unsuccessful candidate for the Imperial Shrine officer line in 1944 and 1945.  By the time of the Imperial Session in San Francisco in 1946, Truman had become President, and allowed the rumor to spread that he was coming to the Imperial Session to campaign for his friend.  He wasn’t able to leave Washington, D.C., but Land was elected Imperial Captain of the Guard, anyway, and eventually served as Imperial Potentate in 1954-1955.

Truman once said, “Frank likes me despite my shortcomings, and I like him because he hasn’t any.”

1.) Do you think the first part of Truman’s statement was true? (Frank likes me despite my shortcomings…)

3.) Do you think that the second part of Truman’s statement was true, or was it just public flattery? (I like him because he hasn’t any!) Is it possible that Dad Land was really that good ALL THE TIME?