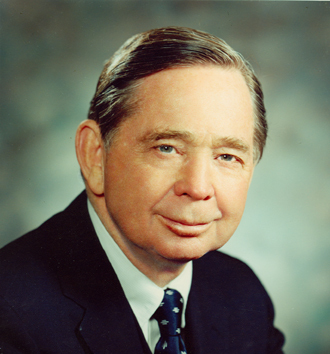 Former Speaker of the U.S. House of Representatives

"In reflecting on my forty-nine years of public service, I find that the precepts of the Order of DeMolay have been invaluable to me. This was particularly true the two times I was just a heartbeat away from the presidency of the United States and faced very difficult decisions. My public life, as well as my private life, has been guided by the DeMolay vow - to love and serve God, my country, and my fellow man."

Senior DeMolay Carl Albert rose through the political world to become the 46th Speaker of the United States House of Representatives.

Carl Albert was born on May 10, 1908, in Oklahoma. He studied at McAlester High School. During high school, he polished his speaking skills and won a regional oratorical contest in 1927, and a national competition in 1928. After graduation from the University of Oklahoma in 1931, he won a Rhodes Scholarship. He spent the next three years in England, studying at Oxford University. He served in the United States Army from 1941-1946. What followed was a distinguished political career. Albert served the United States House of Representatives from 1947-1977; at the time of his retirement, he was the longest-serving representative in Oklahoma history.

Albert's time as Speaker of the House of Representatives was a difficult time in history. The Vietnam War divided the nation, and the Watergate affair threatened constitutional order. During the crises, Albert conducted business with dignity and integrity. Twice, he was second in the line of succession to the presidency. Albert left the speakership a far more powerful office than it had been when his speakership began.

Albert was initiated into Daniel M. Hailey Chapter DeMolay in McAlester, Oklahoma, in 1926. Albert was a member of South McAlester Lodge #46, a Scottish Rite 33rd Degree Mason, and a DeMolay Legion of Honor recipient. Albert was inducted into the DeMolay Hall of Fame on June 21, 1996.

Former Speaker of the U.S. House of Representatives

Elected to Congress in 1946

Chairman of the Platform Committee (1964)

Honorary Degree from University of Oklahoma (1991)

Oklahoma Statesman of the Year (League of Women Voters) (1993)

Member of Oklahoma Hall of Fame