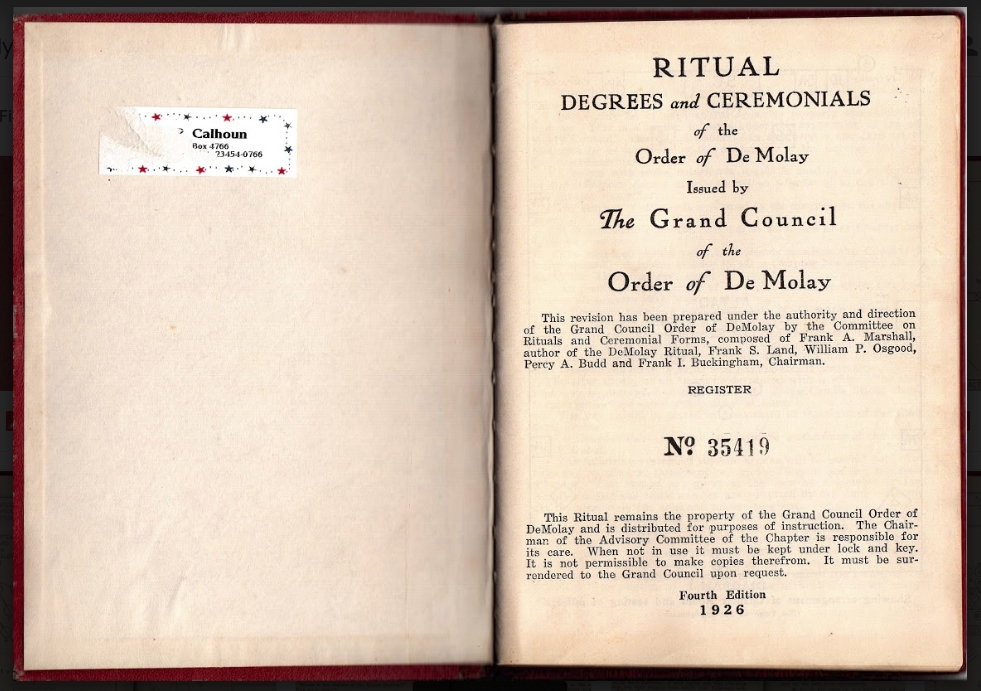 To continue our discussion of the development of the Ritual, it should be noted here that the 4th Edition had the biggest change in the DeMolay Degree. The Orator's Prologue was almost completely re-written. The only paragraph that survived was the last one. All of the characters were given names-- the Inquisitors were called Commissioners and had names like Cardinal Legate, Phillip de Maringe, Archbishop of Sens, and the Bishop of Alba. Armand Novelle was the Marshal of the Commission (formerly called the Conductor of the Accused.) De Chatillon was the Lord Constable of France, a new character, who gave the final condemnation to DeMolay and ordered him to the stake. That sentence had, until that time, been the final vengeful statement reserved for the Master Inquisitor.

Most of the dialogue of the degree was the same, until the end, when Jacques DeMolay and Guy of Auvergne, the Preceptor of Normandy, are grudgingly permitted to have a farewell scene that includes a visionary look into the future. Jacques DeMolay foretells a land where "men shall teach each other tolerance instead of hate" and "the youth of the world [are] trained to be its noblest strength."

He closes his speech with, "Oh! new and noble land. Oh! new and noble day, we who are about to die salute thee!"
This speech, which only was a part of the ritual for 4 years, makes sense out of today's Orator's prayer, when he says, "As thou didst salute us and these times of ours, so we salute thee through the centuries that have gone..." When this very strange farewell, the visionary scene, and DeMolay's future salute were all removed from the ritual, nobody thought to clean up the revised Orator's work and remove this reference from the prayer.

1. What happened, that this radical change in the DeMolay Degree only officially lasted 4 years?
2. Did you ever wonder what that statement, “As thou didst salute us in these times of ours” really meant?
3. Now that you know the ritual has changed a lot over the years, if you were on the DeMolay International Ritual and Regalia Committee today, what changes would you propose?