The Rev. Herbert E. Duncan, writing in “Hi Dad!,” reports the story of the first time the original 9 members on February 19th met with Frank S. Land over ice cream sodas.  He tells of their subsequent drop-in visits at his office, and the first gathering on March 24th, of 31 boys invited by the original 9 to become members.  This story comes from the memory of the First Master Councilor, Gorman McBride, and from having had heard Dad Land tell of the beginning numerous times.  But the source for later meetings comes from the Minutes Book of the Chapter.  Usually, Minutes are just a boring part of meetings—something we have to do.  Let’s be glad the Louis Lower, the first DeMolay, was also the first Scribe, and he took his job seriously.  It is from the Minutes that we know what happened at each of the first meetings of the Chapter as it grew and developed.  The following lines in italics are from the first written Minutes. 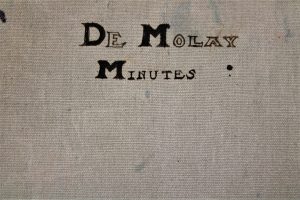 The Minutes of the April 1st meeting are short. Only the essential business was recorded. Mr. Land and President McBride gave some “talks” but no details are included to know exactly what they said.

“The President called the meeting to order…” There was no ritual, or even a format for the meetings yet. There were no officers. Gorman McBride had been chosen by Dad Land to be the first leader of the group and Louis Lower had been chosen to be the first Secretary.  Why?  Dad Land knew them, and their abilities. Louis worked for him—he knew his skills would make him ideal for the careful record-keeping a new organization needed.  McBride was the son of George McBride, a fireman with the Kansas City Fire Department, and a member of the Fireman’s and Policeman’s Scottish Rite Club that Land had organized. He had met young Gorman on several occasions and knew him to have leadership skills.

“The club agreed on 7:45 P.M. as the regular time to call the meeting to order and Tuesday as the regular meeting night.” To continue the idea of a club, a basic structure had to be set. Club name selected?  Check!  Meeting date and time chosen?  Check!  Officers elected?  Not so fast— maybe we want to think about this! So, further discussion was ended by the first recorded motion in the history of the Order of DeMolay. 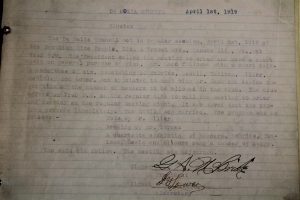 “It was moved that the program procede immediately.”  The boys had had enough of the organizational talk.  Or perhaps they wanted to talk among themselves about what officers should be selected, how, and most importantly, who. So that was effectively tabled until the next meeting by this motion to just “move along.”  It was time for some fun, which included a solo, a reading and songs from a quartet.

“The eats did follow.”  Yes, food has always been an important part of DeMolay meetings.  Refreshments, or visits to a pizza shop on the way home, are almost a requirement to keep members engaged and coming back.