“Dad” Land and his wife, Nell, were early adherents to a branch of Christianity that was rather controversial from its beginnings in 1875 in Boston, Massachusetts, known as the Church of Christ, Scientist.  This non-trinitarian version of Christianity used the life of Jesus and in particular his ministry of healing, as the basis of its teachings.  (Christian Science is NOT to be confused with the modern-day Church of Scientology—they are very different!)

Founded by a woman named Mary Baker Eddy, the Church of Christ, Scientist, taught that the healing powers of prayer were better than modern medicine, and since medicine in those days was a hit or miss proposition, sometimes prayer and time for the body to self-heal seemed to work better than the concoctions of doctors.

“Christian Science” as it became known, had some major controversies in the early part of the 20th Century, when parents refused medical treatment for their dying children.  In some parts of the country, members of this Church were severely persecuted for their beliefs.  We see similar attitudes today among those who choose not to have their children inoculated against the measles and other diseases that used to seriously strike terror in the hearts of parents just 50 years ago.  As you may have seen on the news, recently, the controversy continues, and the outrage at the death of children causes extreme actions and emotions among many people.

Regardless of these controversies, the Christian Science church was a strong and good influence on “Dad” Land who was known to be a firm believer in prayer during every day of his life, and not just in times of crisis.  He did not push his religious beliefs on anyone, but he expected DeMolays to be religious, to attend a church, synagogue or temple of their choice on a regular basis to worship God the Creator of All.  He invited others to worship with him, but he was not a recruiter for his church.  While he believed in the doctrine of healing prayer, it did not prevent him from seeking medical help when his illnesses started to slow him down.  The important thing to remember about Dad Land was his firm faith, and his daily practice of praying on behalf of others.

1.) Have you ever heard of the Christian Science religion?

2.) Does it surprise you that “Dad” Land was a firm believer in this particular branch of Christianity?

4.) Do you think that it is possible that the persecution of fellow Christian Science church members might have had something to do with the principles of Fidelity and Toleration being featured prominently in the DeMolay Degree?

5.) Here is a more difficult question to consider: the Christian Science religion was said to be “non-trinitarian.”  Can you explain what that means?  [Do you have a cell phone with you?  Look it up and share with your brothers!] 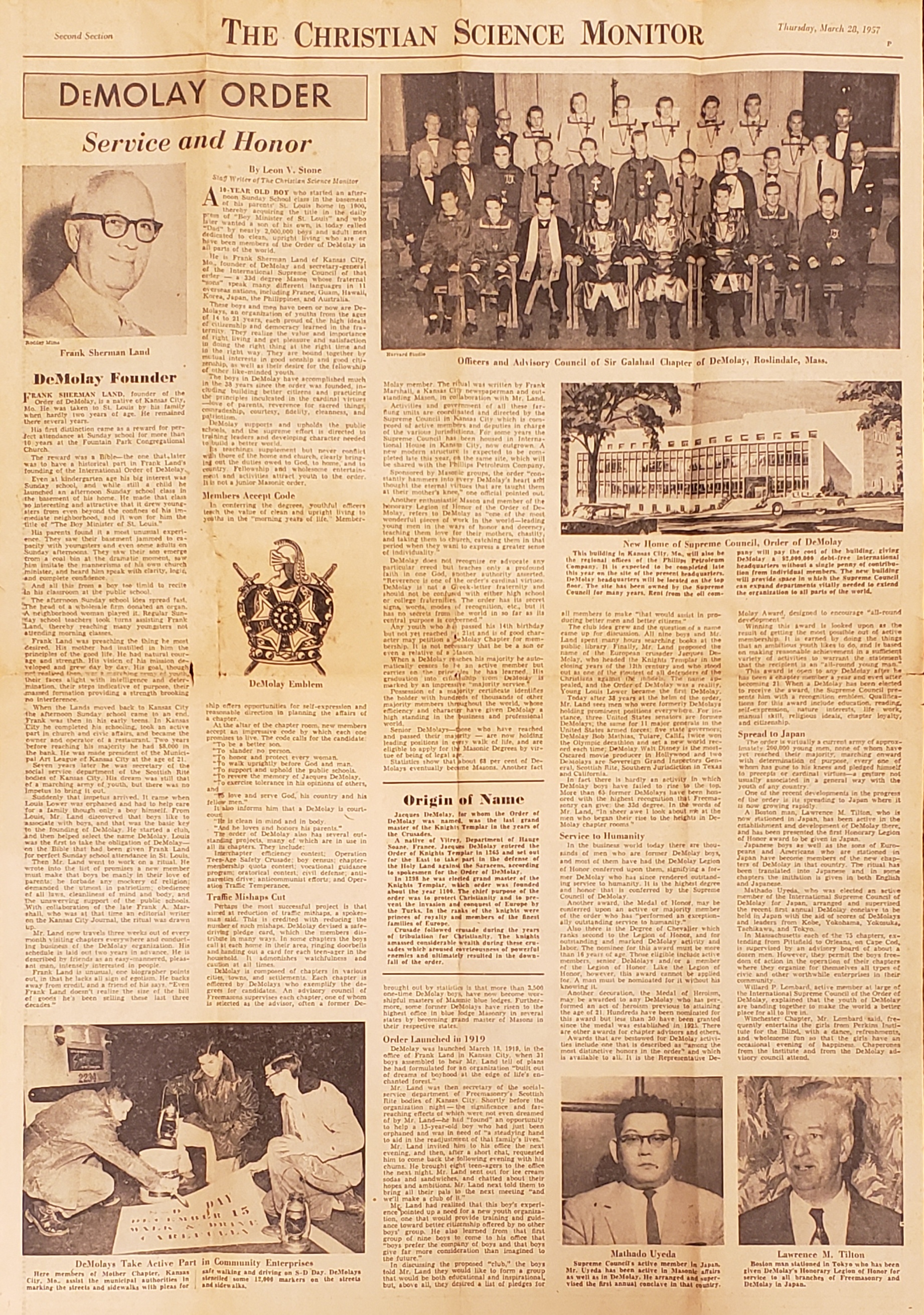